Subcritical Fluid
Subcritical fluid refers to a substance that exists in the form of fluid under conditions where the temperature is above its boiling point but below the critical temperature and the pressure is also below its critical pressure.

Critical Temperature
When the temperature does not exceed a certain value, pressurize to liquefy the gas. Above the mentioned temperature, no matter how much pressure is applied, the gas cannot be liquefied. This temperature is called critical temperature.

Critical Pressure
At the critical temperature, the pressure necessary to liquefy the gas is called the critical pressure.

Commonly Seen Extraction Solvent
When extraction solvents such as propane, butane, high purity isobutane (R600a), 1,1,1,2-tetrafluoroethane (R134a), dimethyl ether (DME) are present in a subcritical fluid state, the molecular diffusion properties are enhanced. Those solvents’ mass transfer rate is accelerated, and the permeability and solvency for the non-polar, medium-weak, and highly polar substances of the natural products are significantly improved.

The boiling point of the solvent suitable for subcritical extraction is lower than the ambient temperature around us. Generally, the boiling point is below 0℃, and the liquefaction pressure at 20℃ is below 0.8 MPa (gauge pressure).

The subcritical solvents used in industrial applications are butane and propane initially. Then comes success with dimethyl ether, tetrafluoroethane (R134a), liquid ammonia, sulfur hexafluoride, dichlorodifluoromethane (freon R12), and chlorodifluoromethane (Solvents such as Freon R22).  Because of the difference in the polarity of these solvents, they can be used to extract different target products in applications.

NOTE:
Latent heat of vaporization is a physical property of a substance. It is defined as the heat required to change one mole of liquid at its boiling point under standard atmospheric pressure.
Explosive limits specify the concentration range of a material in the air which will burn or explode in the presence of an ignition source. 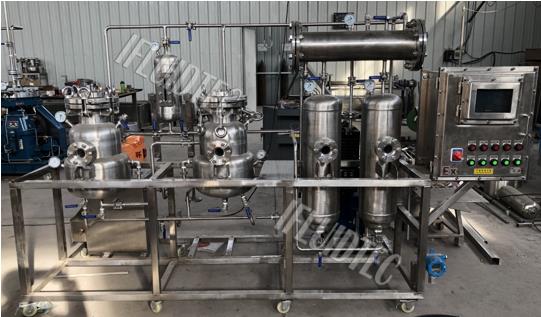 Material/ solvent ratio
Theoretically speaking, a larger solution ratio, a higher extraction efficiency, and the industrial production process are generally controlled between certain ratios for the reason of cost optimization.

Stirring
The extraction process is a process of molecules relative diffusion. Moderate agitation can increase the mixing between solvent and material, reduce the diffusion resistance in the extraction, and make the concentration of the extraction system to favor the fat-soluble component in the solid material diffusion to the liquid solvent.

Selection and application of solvent and entrainer
A suitable amount of entrainer(co-solvent) can significantly increase the solubility of certain extracted components in subcritical fluid.

Subcritical Fluid Extraction Application
There is a wide application for butane extraction in the plant, herbs, essential oil, perfume, pigment, animal fat, protein and etc., below list some of the samples.

We mainly describe the operation safety from three aspects, even our butane extraction equipment is strong and safe. 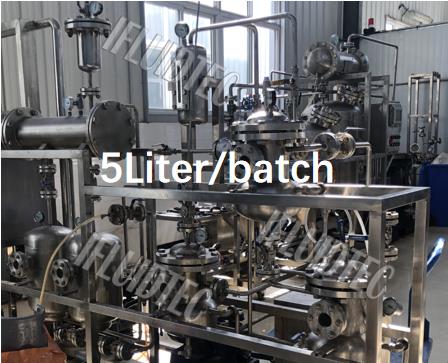 The subcritical solvent in the extraction process itself is a flammable and explosive hazardous chemical. Air entry into the process is a major hazard of the equipment itself. If the proportion of air in the equipment reaches explosion upper and lower limits, under sparks or static electricity, there might be an explosion.

The air source in the equipment: one is from raw material loading, the air left after the vacuum; another one is from leakage on the equipment. During the process operation, air entry should be reduced as much as possible. The equipment should be also air release frequently. After the air is exhausted, it can lower the pressure release load on the compressor and also improve equipment safety.

The pressure of the subcritical solvent is generally between 0.3 and 0.8 MPa. The equipment piping and itself are filled with solvent liquid or gas. Leakage at any place will cause a large amount of solvent leakage. When the liquid solvent leaks out, the volume will expand to several hundred times instantly. Therefore, the equipment must be safe and reliable. Never open the equipment port or loosen the bolts or replace parts while there is still solvent or pressure inside the equipment. If any leakage from the equipment, stop operation immediately. At the same time, it is forbidden to use equipment over-pressure!

Electrical instruments and wires in the room should be made of explosion-proof and have reliable electrostatic grounding. When performing electrical maintenance, electrical equipment and power should be turned off. There should be no low-lying areas in the workshop to avoid the accumulation of solvent gas. During the experimental production, no fire is allowed in the room, and electrical appliances (hand drills, video recorders, etc.) and motorcycles are not allowed to avoid generating fire sparks., electric cars, cars, etc., it is strictly prohibited to use mobile phones during work!

III. Extraction Workshop Firefighting Knowledge Operators should conduct fire-fighting knowledge training before taking up their posts. They should master the nature of subcritical solvent fire hazard and fire-fighting methods to rule out the hazard. The explosion upper and lower limits of various subcritical solvents are different, but it is the most dangerous in the range where the concentration of subcritical solvent reaches its limit. A fire spark is prohibited from the workshop. When the solvent is ejected from holes or cracks in the device, it may cause a combustion explosion due to static accumulation. When this happens, the solvent in the damaged device should be immediately removed and the valve of other equipment connected to it should be closed. The personnel is evacuated from the workshop. Only when solvent gas removed and cleaned, the staff is allowed to enter and do the maintenance.

Get Start with Your Project! Get in Touch for a Quick Offer Now!
Friendship Links
Go to Top