A high-shear mixer is widely used in industrial such as adhesives, chemical, cosmetic, food, pharmaceutical due to its functions. It can reduce particle sizes and at the same time make two phases of material into a continuous phase, keeping such status for a long time. The materials are usually not dissolvable(immiscible) to each other.

How does High Shear Mixer Work?
The high-shear dispersing emulsifier is to distribute one phase or multiple phases to another continuous phase efficiently, quickly and uniformly. In general, the phases are insoluble with each other. Due to the high tangential speed generated by the high-speed rotation of the rotor and the strong kinetic energy brought by the high-frequency mechanical effect, the material is subjected to strong mechanical and hydraulic shearing, centrifugal extrusion, liquid layer friction, and impact in the fixed and narrow rotor gaps and the combined effects of tearing and turbulence. Therefore, the immiscible solid phase, liquid phase, and gas phase are dispersed and emulsified uniformly and finely in an instant under the combined action of the corresponding mature process and the appropriate amount of additives. After high-frequency circulation, stable and high-quality products are finally obtained.

Under the action of the centrifugal force generated by the high-speed rotating rotor, the materials in the above figure are simultaneously drawn into the working chamber from the axial direction from the upper and lower feeding areas of the working head. The strong centrifugal force throws the material from the radial direction into the narrow and precise gap between the stator and the rotor. At the same time, it is subjected to centrifugal extrusion, impact and other forces, so that the materials are initially dispersed and emulsified. At the outer end of the high-speed rotating rotor, a linear velocity of 15m/s to 40m/s is generated, and it forms strong mechanical and hydraulic shear, liquid layer friction, impact tearing. Make the material fully dispersed, emulsified, homogenized, broken, and injected through the stator slot at the same time. The material is continuously ejected from the radial direction at high speed, and the flow direction is changed under the resistance of the material itself and the mixing tank wall. After several cycles, the desirable material is finally completed.

Mixing and Dissolving:
To mix and let material dissolve to each other either solid/liquid or liquid/liquid, reach a molecule or colloidal state. Such as crystal powder, salt, sugar, acetosulfate, abrasive, hydrocolloid, CMC, thixotropic agent, rubber, natural synthetic resin

Homogenizing:
Making the emulsifier or suspension even smaller particles. There are so many types/models of high shear mixers, according to the positions in the mixing tank, we classify them into the top-entry high shear mixer and the bottom-up high shear mixer. 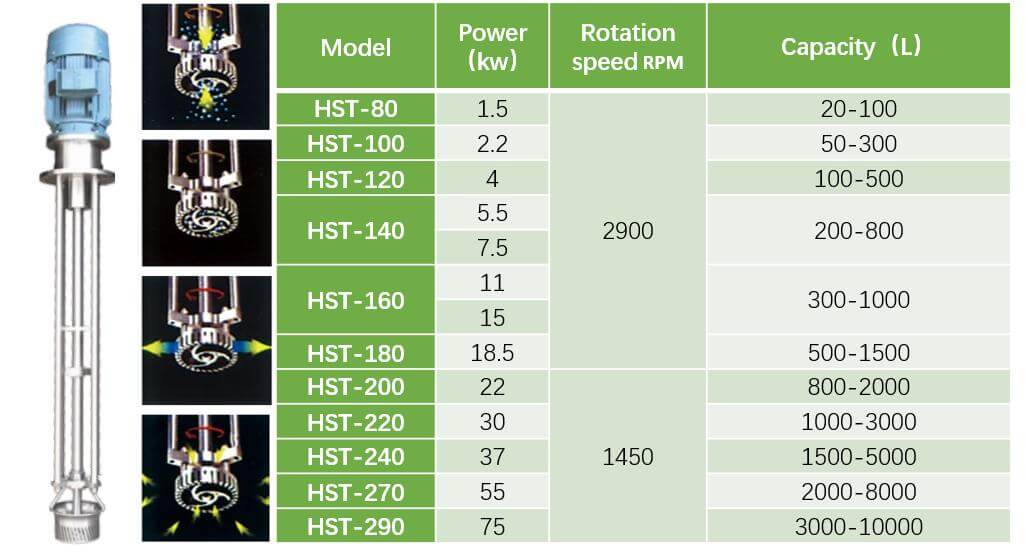 Bottom-Entry High Shear Emulsifier
The bottom high-shear dispersing emulsifier is mainly used to install at the bottom of the stainless steel tank. It can solve the problem due to room space limitation and at the same time, it can work together with the agitator in the tank for better dispersion, emulsifying and homogenizing of the materials. This bottom high-shear dispersing emulsifier can be applied in food, pharmaceutical, cosmetics, coating chemical, electronic products, and petrochemical industries.

There can be dozens of types of homogenizing teeth designs for homogenizer upon the different application purposes. For various materials that of not the same property, we have to choose carefully, so feel free to contact us for professional advice.

High Shear Pump|Inline High Shear Mixer|Inline Homogeniser|Inline Emulsifier
Besides the ones that need to be used together with the mixing tank or stainless steel vessel, we also have the high shear pump that can provide the same high shear grinding and cutting function that can be piped into a production system.

The high shear pump(emulsifier or homogeniser function) is high-performance equipment used for continuous production or circulating processing. They can be connected with tank and or production systems by piping. In the narrow space of the high shear pump chamber, there can be 1 or 3 sets of rotor and stator assembly. The rotor rotates at high speed under the drive of the motor to generate strong axial suction force to suck the material into the chamber. Disperse, shear and emulsify the materials in the shortest time, and the particle size distribution range also becomes significantly narrower. In this way, a fine long-term stable product can be produced.

The advantages of high-shear dispersing emulsifier Pump
Large processing capacity, suitable for industrial online continuous production;
Time-saving, high efficiency, and energy-saving;
Low noise and smooth operation, simple to use and easy to maintain;
Eliminate quality differences in batches production;
No dead angles, 100% of the material passes through the high shear pump;
Can be updated to automatic controlling;

We provide several variants for buyers to choose, those are very practical, smart and easier configuration than conventional production process. The buyers can not only purchase the high shear pump from us but also asking for necessary pipings such as hopper, control cabinet, valves. Our quality is good enough to be used as the pharmaceutical degree.

Other options and assembles of high shear mixer and tank, welcome for contacting us for your project.

Get Start with Your Project! Get in Touch for a Quick Offer Now!
Friendship Links
Go to Top